In this lil corner of the globe… 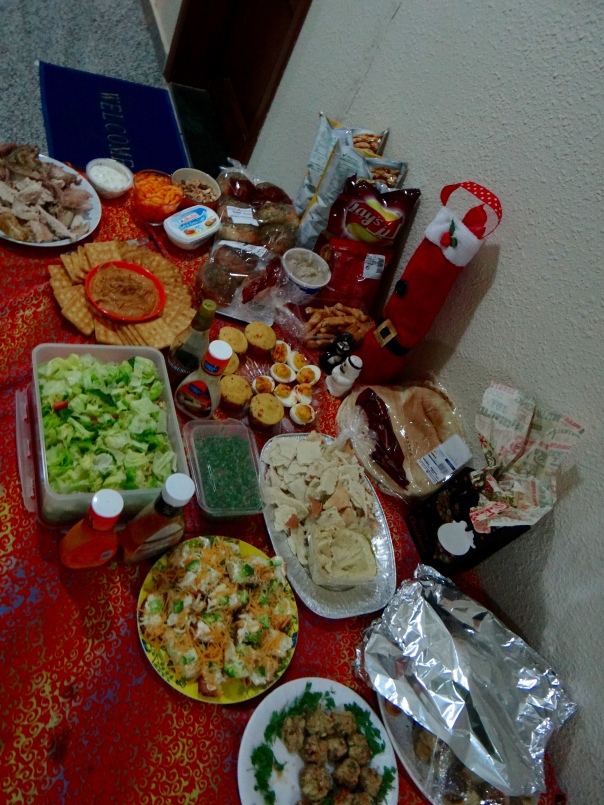 We’re all stuffed and thankful for another year of bonding with folk from all over the world.  My lovely neighbors and I had our second Thanksgiving party where we all share a little bit of where we come from while thanking the powers that be for our time here.  Our Thanksgiving buffet included all the normal stuff (except cranberry sauce — we forgot about that one) plus European, Asian, Indian, and Arabic foods.  Above is just one of the tables of food in the hallway — there were four, plus all the stuff we had in our apartments.

The weekend prior we threw a baby shower for a friend, and the weekend after next we’ll celebrate Ashley’s birthday.  At all of these events you’ll see people from different faiths and cultures laughing, dancing and loving life together. When we talk politics it isn’t about this politician versus that politician; it’s about how we move on from the nastiness that takes place within all of our borders, and how we wish normal folk were running the world, so there’d be more people breaking bread than ruining lives.

Random party shot in Ashley’s living room; women bonding over crafts and chocolate in my living room — kitchens and living rooms are totally where global decisions should be made.

We’re all also extra cheery right now because this is the time of year where  everything gets just a little bit easier.  Many of us are traveling next week since we get 5 days off for National Day, and then two weeks after that we teachers are on a two-week Winter Break.

Our students have finished off their trimester projects and wowed us with their presentations.  Mine held a career fair, and I was so very proud of each and every one of them.  Teenagers — everywhere — continue to give me hope … even when they’re driving me crazy.

It’s now dinner time on my version of a Sunday, so time for me to warm up some leftovers and watch the moon rise from my balcony — oh AND appreciate all the National Day lights and decorations.  The medical center right next to my balcony has blinged out with a humungous flag and star lights: makes sipping tea or grape juice even more fun.

Until the next time, sending you lots of love and warm wishes from my laptop to yours.

Aaargh was getting ready to go to pool, and then I read something that ticked me off…

I’d be lying if I typed that I’m not paying attention to the news, or not worried about this latest rash of terrorist attacks.  Of course I’m bothered by it all, and of course I worry about where this will all lead.  This time next week I’ll be packing my suitcase for another trip into another predominantly Muslim area, and while I’m not losing sleep over whether or not my friends and I might be targets, I am losing sleep over the state of our world and its bigotry/idiocracy.

I’m outraged by any human being who thinks it’s okay to slaughter other human beings in the name of their perceived God or higher calling; I’m sickened by those who pontificate the same sort of shit from their keyboards or political platforms.  An American-Muslim friend of mine said she doesn’t consider ISIS (or better yet let’s get that whole Islamic State out of their name and call them douche — I like it better than daesh) Muslim.  They are not what her faith or her people represent.  I say the same for any authority figure —— politician, businessman, clergyman —- in America who spews anti-people vitriol.  They are not America.  They do not represent what my country’s doctrine represents.  Deep within my heart of hearts I have to believe that the majority of Americans do not think this way.  I have to hold on to hope that the majority of the world does not think this way.  Because if they do, then the terrorists aren’t who we should fear.

I cannot believe I live in a time where I can watch movies on my phone and have my car tell me where to go, only to scan headlines where alleged leaders cater to a twisted version of playground politics.  Sticks and stones may hurt my bones, but words will never hurt me.  That’s the lie:  its our words that are killing us.  They lead to more fear and more hate, which feeds into “their” (insert enemy of choice here) fear and hate.  Can’t we do better than this?

I’m not naive.  I know wars need to be fought.  I know, unfortunately, bloodshed will need to happen to prevent more bloodshed.  I know more of our young people around the world will have to do the very adult thing of fighting these wars.  I don’t know what to do about the Syrian refuge crisis.  Of course there are douches imbedded with some of these camps, but oh my goodness so are countless good human souls. There are douches of all sorts imbedded in all forms of our societies.  Do we give up on the good just because of the few, or do we use our damned intellect and figure a way to weed out who needs to be weeded —- and do we figure out how to do that without giving in to our prejudices?

I don’t know how we afford to feed and house and provide some sort of peace for so many who can no longer go home —- and not just Syrians, but so many others who also face a violence and fear most of us, thankfully (and hopefully), will never know. Some of those people are our own living and dying within our own borders.

There’s so much I don’t know, but what I do know is the older I get the more primitive my world seems to become.  Or, maybe it’s just my country’s handling of it.  Forgive me for connecting my world view with my country view —- I am American after all, and we sometimes do that.  But, that’s also not always a bad thing.  We have so much good to offer as well —- seriously, I know many of you in other parts of the world may not see this, but we are also a giving and loving people.  Why oh why are we letting our uglies get center stage?

I try very hard to not publicly post political comments because the dialogue that tends to take place usually doesn’t solve anything, but today I’m posting my version of a war.  It’s my war against hateful words.  We can’t stop the media from focusing on the bullshit, but we can stop ourselves.  Let’s not give credence to the fools who say hateful things that pull us back.  Instead, let’s start posting our solutions or sharing things that might make sense —- even if they don’t align with our normal political or religious affiliations. If we take out our own biases we might just come up with something that works versus tearing us apart.  Yeah, I know haters are still gonna hate, BUT WE don’t have to.

Yesterday was a big day for the UAE.  Flag Day kicks off the countdown to National Day, so throughout the next few weeks patriotic decorations will be popping up all over the place.    It’s a festive time where Emirates can show off their pride.  My school purchased a boatload of cakes and arranged them in flag formation.  We also had a variety of celebrations throughout the day.  Needless to say the girls had fun, and it was an easy day.  I always love watching kids be kids — regardless of how old they are.  My girls blew up a bunch of balloons and then released them.  It was beautiful — if only my phone could’ve captured it on time.

To see cool pics about Flag Day throughout the country, click here

Today is my daughter’s birthday, and in a few hours she and the rest of my family (Kyle is in town since his birthday was on Tuesday) will get together for a nice family dinner.  Of course I wish I was there, but I’m glad they’re celebrating together like they should.  It makes me proud of who they are, and I know they’ll have a great time.  In another year or so I’ll be back to celebrating holidays alongside them again — and we may just have to buy a whole bunch of cakes too!

Last week I had fun in Abu Dhabi with friends.  We dressed up and did halloween our way, which can only mean a good time.  The weekend before that Abu Dhabi friends came to Al Ain where another good time was had.  Basically, we’re all keeping each other happy and busy so that none of us gets too homesick, especially now that it’s fall.  Luckily, we can also get our pumpkin spice fix at Starbucks, so all is right with the world.

Work will be winding down soon as well.  I have another two weeks of actual teaching, and then it’s just review and presentation time.  We get 5 days off first week of December, so a beach trip on an African island is booked.  I’ll surprise you all with photos when we get there.  I’m so excited about this.

Two weeks after our little beach trip, and I’m on my way to Germany to bring in the holidays.

Oh and before that we have a baby shower planned and our apartment complex’s Thanksgiving dinner.  Whoop!  whoop.

I wish I had more to share with all of you, but it’s pretty much the same.  I work during the week, walk or go to the gym at night, sometimes read, sometimes chill with friends, sometimes with netflix or HBO (OMG The Leftovers is fantastic this season), and live the life with friends on the weekends.  I’m still missing my family, but also still loving the time I have here.

Next time around I’ll find an Al Ain snippet to share with you.  Don’t know what it is yet, but I’ll give you some sort of glimpse into life in the Oasis.  Until then, hope all of you back home are doing well.