Joe is here; Badger not yet.

Woo hoo Joe made it on Monday.  I would’ve typed up something sooner, but it’s a mixed welcome.  I’ll write more about the downside of this all after Badger gets here, but long story short the airline refused to let him on the flight because there wasn’t a full three inch clearance from the tip of his ears to top of crate, despite the fact that he could easily stand, turn around, etc. in the crate like their website said needed to be the case.

Devastated, Joe rushed to catch his plane.  What he didn’t know is that while he was flying here, I (with Kaylene and Kelly’s help) already bought a bigger kennel and rebooked Badger to leave Wednesday morning.  What I didn’t know (nor did I know it was an issue) was that Joe had Badger’s original papers on him, which prevented Badger from being allowed onto second flight.  Now we need to redo paperwork because it’s no longer valid.  So inshallah the dog makes his big flight next week.  Trust me I have some venting to do, so more will be written in here and to the company.

Joe waiting on his dog!

As for Joe being here it’s surreal.  He retired a week ago, and it still hasn’t sunk in that he’s not here on vacation, visiting his wife.  We’ve taken lots of walks, inhaled quite a bit of beer, visited Brussels, got him in-processed at base, and lol netflixed and chilled.  I’m very happy to have my man home.   Monday I go back to work, so the ‘normal’ life will begin.

Badger at Joe’s friend Mike’s house waiting to join us.  Thank God for good friends and family!  Between Joe’s friend and Kaylene and Kelly running around all over Phoenix for us at ungodly hours, Badger will finally, eventually, hopefully make it here. 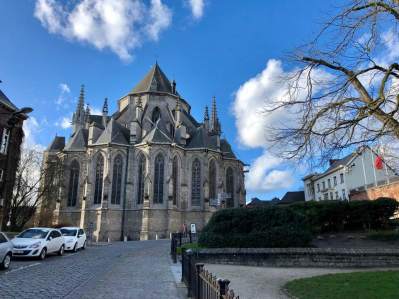 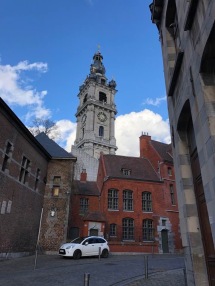 Posted in Belgium Year One