Okay first I’m going to brag about my time doing the cosmopolitan thing and playing with the pretty people in Dubai.  I had a blast this weekend.  Thursday night I happy-hour chilled with friends on a lovely hotel terrace then bee bopped on a rooftop club full of hipsters —- finding my shisha, cocktail nirvana amongst the young and city lights.

The next day we gussied ourselves up (and looked mighty damn fine if I do say so myself) for the Toy Brunch at Westin.  The Toy Brunch is different than most brunches.  It’s set in a swanky black and silver night club decked out with lego blocks, trucks and other toys.  A duck taco stand is in one corner, a bar in the other and a moveable platform somewhere in the middle.  Waiters bring you platters of Asian food —- beginning with an assortment of dim sum and sushi and ending with miniature pastries.  The food and perpetually flowing champagne is nice, but the acts are what give it its extra umph.  One minute you’re inhaling a skewer of meat, the next you’re watching a ballerina in a helmet pirouette on that platform, followed by a contortionist, minions, mimes, pokemon and a whole assortment of toy-themed fun, including a little-man magician.  It’s surreal. 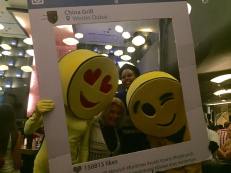 Some of Haneefa’s pics (my phone sucks)

The young in slinky, sexy outfits abound, and I was feeling just like one of them until a 22-year old said to me, “I wanna be just like you when I’m your age.”

My age?  What in the hell?  Did she not realise in my head I am still 19, and hello?  I thought I looked pretty darn cool in my macrame sweater (hahaha typing this I realize hmm maybe not the best choice) and black dress.

But check it out, here I am riding a jackass (and I beat off a few young ones telling them I’ve had plenty more years experience).

It’s all good because age aside, my table —- of 30, 40 and 50 somethings —- was one of the first to be moved to the upstairs portion of the club (when the food service part was over), where we got our own couch and perfect view of ‘toy’ dancers, and I had a fabulous time showing the young how it’s done ‘when my age.”  One day in their too-near future they will live to regret those words.

I even woke up the next morning feeling perfectly fine, but as the day wore on indigestion kicked in, and then an old back injury started acting up.  Long story short I popped some tylenol PM and alka seltzer before going to bed in hopes of a good night’s sleep.  Then boom!  the scariest headache of my life kicked in.  I, honest to god, thought I was having a stroke.  I called my neighbour Haneefa (and also the youngest playmate I had this weekend) who took me to the ER.

Five hours later, an EKG, Cat Scan, IV drip of something and blood work, and I learned that there was nothing wrong with me — well except for the fact that I’m 51 and my body is rebelling against this thing called ‘the change.’  I tried to rationalise what had happened —- too much good food and prosecco?  bad reaction from tylenol pm and effervescent antacid?  But, no the obvious answer is on the Internet.   Apparently, women my age can experience this kind of thing when there’s a drastic change in estrogen.   Who knew?  And, there it is: I’m facing my age all over again.  If only this thing that’s happening would hurry up and delete my cycle I’d be much happier about it.

That said it is what it is, and I’m not going to dwell on it now that I know what it is.  The next time my brain explodes I’ll just live with it.  Am I embarrassed that my poor friend had to sit with me at a hospital for too many hours on a work night for something that was just hormonal?  A little, but two other things happened to put it all in perspective.

Yes this aging thing is a bitch, but I get to do it.  And I thank the powers that be for every second that is given to me —- and rock my damned crocheted sweater and heals while doing it. 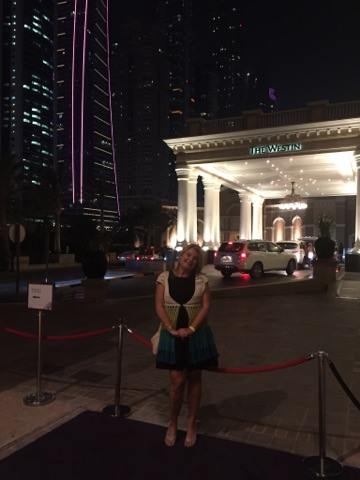 putting this here just so in 20 years I could look at it and say, “damn I looked good when I was ‘young.'”  Plus it looks a little cosmoish!