← Mini moon…
The land of cows, curry, and controlled chaos. → 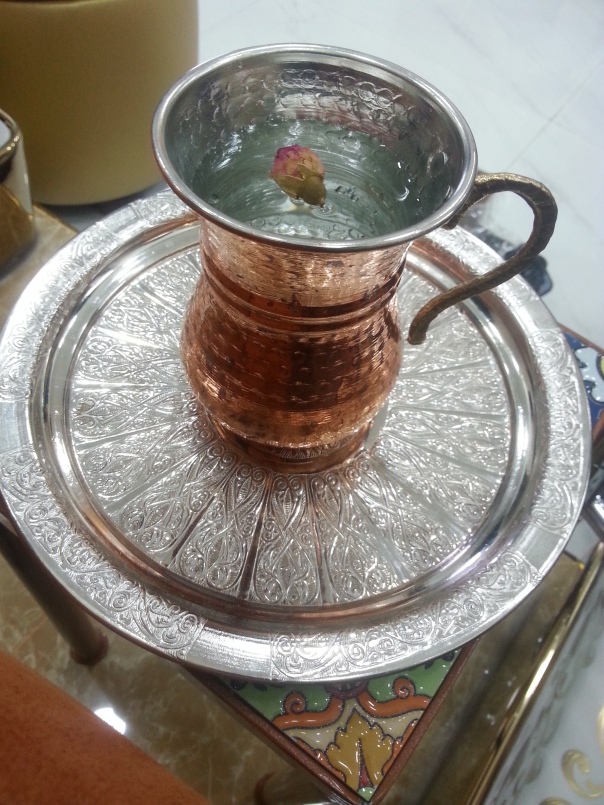 This is how my favorite salon serves me glass of water…they also gave me a super cool manicure that includes ‘mood’ polish, which changes color depending on my body heat.  I freaking love it.  Hot pink means I’m hot, which is most of the time.

I’ve only been back two weeks, but it feels longer because a lot has happened since I landed just two Fridays ago.

First off it does feel good to be back, which is always so weird because at the same time it’s so awful to leave my loved ones.  Socially I’ve not done much:  just eating, drinking and catching up with my friends who are still here (always a good thing).  Work wise it’s been busy, but I’m good.  I have three large sections of girls, but I like them all.  It’ll take me a while to get all of their names straight, but so far I’m happy with this year’s students. Plus, one of my students from last year is chatting with me online, so I’m still getting the scoop on last years girls as well.  How lucky am I to get glimpses of so many budding lives. On Facebook I saw that one of my students from way back just turned 29 — what in the world?!!!

I feel more comfortable and included at work this time around.  I’ve been pulled into meetings I’m normally not part of, but lol I still don’t get much of what is being said since it’s in Arabic. That said fellow local teachers do their best to translate what I need to know, and that is so appreciated.  I know this is not my forever home, but I truly do feel lucky to be where I am.  Despite all the craziness, the last-minute changes, and the chaos of working in another country, I was placed at the right school for me, and I will miss all of this (okay maybe not the chaos and last-minute changes so much) when I leave.  I’d like to think that I too will be missed.  But, we have a whole year ahead of us, so no one’s missing anyone just yet — we’ll save that for June or July of whatever year I leave.

Travelwise on my part things have been a little crazy.  First off we so lucked out this year.  We have ALL of next week off for Eid al-Adha — whoop whoop!  Basically, we come back, go to training for a week, teach for two weeks, and then whalla take another vacation.  Sweet, right?  Well you’d think that’d be the least stressful part of my being back.  Not so much.  First off Shannan and I were supposed to go visit a friend in Hong Kong.  I was really excited about this, but after trying to book tickets FOUR times and failing I gave up.  I took it as a sign that Hong Kong is not meant to happen this time around.  Plus it’s a long fight and not the cheapest trip, so then we said okay we’ll do Goa, India.  Short flight, cheap and beaches — woo hoo!  Jordan landed us an awesome flight and hotel deal, so yay.  The problem is landing an Indian tourist visa.  Holy hell … the online application is a pain.  The system kept crashing (could be my internet since I’ve been having trouble with it ever since I got back).  Long story short after several tries I submitted my online visa app only to have it rejected.  I took today off to go directly to embassy to get it worked out.  Luckily, I called first and was warned my visa might take 7 working days, which means I’d miss my flight (it’s on Saturday).  So, after several hours (I kid you not) of doing the online process thing again, I resubmitted my visa app.

There’s no telling if I’ll actually get approved this time around, but I’m keeping my fingers crossed.  Looking at the pic of my passport I uploaded the first time around I see that it’s blurry, so that might have had something to do with rejection (and I can’t seem to get through to anyone who knows why it was rejected).  We shall see.  I’m either headed to Goa on Saturday, or drowning in my tears here in Al Ain.  I’ll let you know how it all ended up.  Lesson learned:  don’t apply for this visa within the same week of flying out; make sure you have ample time to work out any kinks!

While all this is going on Joe and I are also planning our Christmas trip.  Looks like we’ll end up somewhere in Scandinavia, but who knows that could change as well.  We’ve some ideas, but it’ll all depend on what flights we can nab.  South Africa is on the table as well, but so far that’s a really expensive flight for Joe.  Either way I’m seeing my man in December!

Back in the U.S.part of my life, Joe and Kaylene are working on getting the house ready to sell. So much is going on at the same time … may it all work itself out to a debt-free, stress-free future for Joe and me — 2017 is the year we’ll both end up full time on the same continent together. woo hoo!  Until then, let’s make these last four 2016 months count.

And that’s about it on my end for now.  Next time I’ll post it’ll either be about Goa or me possibly goin insane — or both.

← Mini moon…
The land of cows, curry, and controlled chaos. →