← Some other writings…
Things I don’t see me missing →

Aaargh in that I was shaking from our hike, so didn’t capture all of the sun as she gave way to the moon, but you get the idea.  Miss Shams (sun in Arabic) rules whether she’s waking up or going to sleep. 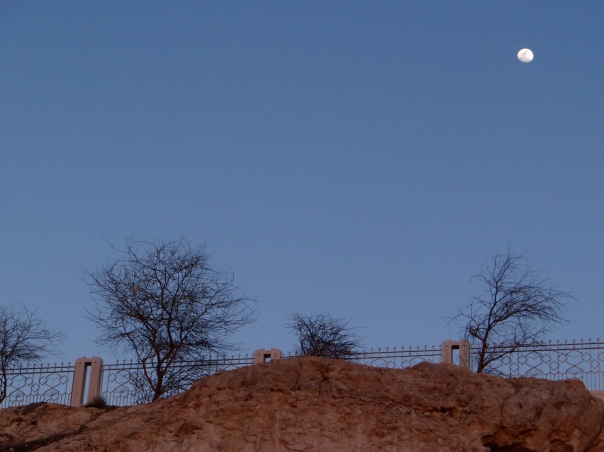 Miss Qamar (moon) doing her part in the changing of the guard — she too rocks her reign when it’s time.  FYI:  the only reason I know the Arabic names is because I have a Shamsa and Qamar in the same class, and we joke about me having the sun and moon.  I keep telling the girls all I need now is someone named Star.

So, as you can tell I’m trying to do a better job of posting more frequently and doing more writing — or cheating by posting pics.

It’s the end of a lovely, easy weekend.  Thursday night I had a wonderful time meeting new people around a fire pit.  It’s been way too long since I’ve done this.  Friday we had a lovely breakfast at Circle Cafe — Al Ain folk, check it out — then lounged at the pool, and then did The Steps, which is literally a steep set of stairs that goes up a small mountain.  It’s a good workout and something Al Ainers often post about.

Shannan’s and my shadow as we begin the descent.

me happy to have made it to the top my second — or was it third? — try.  Sorry folk, but it’s been awhile so no where near my hiking-days shape. 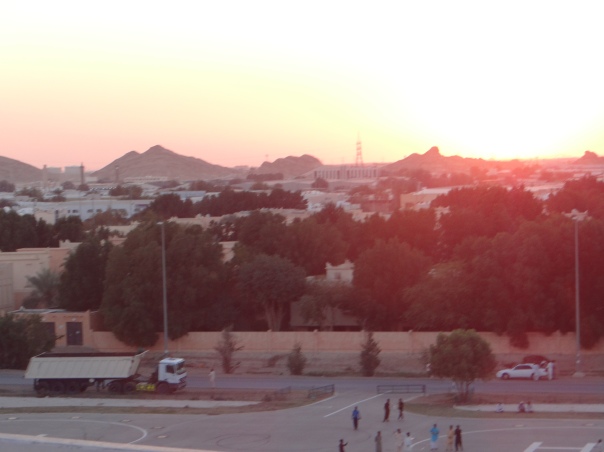 a lil peak of Al Ain; boys are playing cricket below.  Yeah I know I could’ve given you a better shot than this — next time maybe.

Today Haneefa, my neighbor, and I took a morning walk to get coffee and ended up socializing for three hours.  Is there any better way to end a weekend than a long morning sitting outside, sipping lattes and chatting it up with friends?

Other snapshots that I’d love to share but don’t dare snap because I don’t want to invade anyone’s privacy are:

Tomorrow is my version of a Monday, so maybe I’ll be in the mood to post some of the things I don’t love — but let’s be honest I’ll be too pooped and will spend that time sacked out on the couch.

Hope you’re all having a lovely weekend as well!

← Some other writings…
Things I don’t see me missing →